Since Caren is the princess of the Antarctic Ocean Kingdom, she mostly wears purple clothing in her mermaid and idol form. She wears more yellow clothing in her human form.

Caren's hair is much more of a lighter purple shade than in her human form. Her side fringe is slightly messier than in her human form and is placed on the left of her forehead. Her ringlets are more thiner and curled. Her seashell bra is amethyst colored and features purple beads on the sides. Her tail is a solid indigo color and darker to the rest of the outfit. She wears her pearl necklace, lilac seashell earrings, purple bead bracelets on the lower right arm and a purple bracelet on her upper left arm.

Caren's hair is more tidy and appears more glossier. Her hair is much more straighter than usual. She reuses her seashell bra from her 'Mermaid' outfit. However to change up her look, she wears a flared skirt with two layers on top of her purple tail. The first layer is a deep purple shade with frills. The second layer is a lighter purple with more frills and covers the back of the tail much more than the first layer does. Three dark purple bows are attached on the top of the skirt. The two layers are pleated and flow down her tail. She wears her shell necklace and purple bracelets for accessories. In some scenes, Caren is shown to have no ringlets.

Caren wears her idol costume when she is singing and fighting against villains. Caren's hair is same to her 'Mermaid' outfit. Caren's costume is a strapless white mini dress that exposes her legs. The top of the dress is exactly the same to the top of her tail in her 'Mermaid' outfit. The dress is covered with purple and lilac frills on the left side. Her white gloves also have purple and lilac frills and so do her white high-heeled boots. Her accessories are a: E-Pitch Microphone and her shell necklace.

In her Super Idol Outfit, Caren gains more frills on her gloves, dress and boots. A large purple bow is also attached at the back of the dress. Her hair is more gathered together than in other forms and now it is held back with a few purple and white barrettes. Caren's hair has less ringlets and appears more straighter when she upgrades her idol form.

Caren's hair is a darker shade of purple than her mermaid form and is slightly shorter at hip length. The ringlets on the ends of the hair are curled. Her strapless structured top is a light yellow color that covers her midriff. The bottom of the top has two thin black lines. Her long flared jeans are a light blue shade with two smaller pockets sewed in on both sides. Her small heels are orange-brown with orange and yellow frills on them. She wears her purple shell necklace also. Sometimes, she wears a small purple watch and red oval sunglasses with this outfit.

Caren's hair is darker purple and the hair ends are curled up in ringlets like in her casual outfit. Her bandeau bikini bra top is bright yellow and a red rose is printed on the right cup. The bikini top also has light yellow string straps. She has a matching mini yellow sarong that is tied to the right side and covers half of her left leg and exposes the right leg. Caren is not wearing any shoes but has accessories such a her purple shell necklace and her small purple watch. In some scenes, the sarong is shorter and Caren's wearing a purple bracelet instead of her watch. 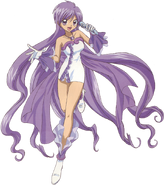 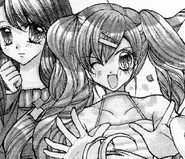 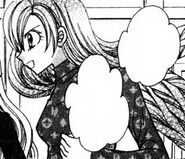 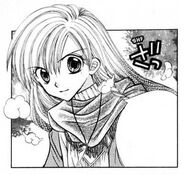 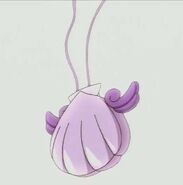 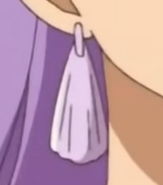 Earring in idol and mermaid form 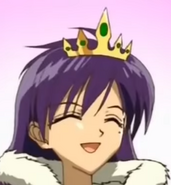