Coco (ココ Koko) is one of the main supporting characters in the anime Mermaid Melody. Her debut was marked in episode 4 in Gaito's castle. The episode that centers around her is episode 64.

Coco is the princess of the South Pacific Ocean. Using her Yellow Pearl, she can transform into Yellow Pearl Voice and help fight against evil. Coco is the first princess to be trapped in Gaito's castle. In the manga, Coco followed Sara to Gaito's castle because she was worried about Sara's change of heart. When seeing her growing close to Gaito, Sara threatens to destroy Coco's kingdom if she does not allow Gaito to capture her. Coco is a loyal friend and thanks to Coco's feelings of love, Sara was put back on the path to her true self. She seems outspoken and brash at times, more so in the anime.

In the second season, after defeating Gaito, she returned to her kingdom to help on its rebuild. On her first Summer after her release, she joins the human world for her vacations with Caren and Noel. She finds out that Hanon flirts with a guy named Nagisa Shirai. She acts like a cupid as shown in episode 69 when she tries to get Hanon and Nagisa together after she overheard Rina and Lucia talk about Hanon treating Nagisa badly. She get Noel and Caren to help with her plan. Her first plan was call "Have Nagisa Profess His Love by the Sea! Operation Attractive!" by having Nagisa breaking a watermelon while being blindfolded, and having him ride a banana boat at top speed. Her second plan was called "Confession of Love to Nagisa by the Sea! Operation Jealousy!" by having Noel attaching herself to Nagisa to make Hanon jealous. However the plans to Lucia and Rina make them believe that Coco and the others are doing this the wrong way.

Coco is a bright, loving and caring girl. She normally worries for her friends, especially Sara, and can keep their secrets very well. She is also a fun-loving mermaid and often goes around flirting with boys on the beach. The manga version is much more gentle than her anime counterpart, who is more brash and outspoken. Coco is loyal to her friends, perhaps even loyal to a fault. As seen in episode 64, she lied to Lucia, Hanon, and Rina to help her find Sara's shell without telling the secret at first. It also seem to appear that Coco is bad at acting as seen in episode 20, for she did not fool Hanon in trying to convince her that everything is fine.

Coco has straight, yellow hair in her human form; however in her mermaid and idol form she has light blond hair. In her Human Form she has golden brown eyes, but in her Idol Form and Mermaid Form, she has yellow eyes. Like the other mermaids Coco wears a yellow pendant shaped like a seashell with wings that has her yellow pearl inside it, which she uses to transform into Yellow Pearl Voice.

Coco has three forms. Her three forms, like all other mermaids are her Human Form, Mermaid Form and Idol Form.

In her human form, Coco's appearance develops into a natural human look. Her long hair became shorter and slightly darker in color. Her eyes also change into a golden brown color. She wears her shell pendant containing her pearl like all the other Mermaid Princesses. She usually wears yellow clothing, most which are showy or flattering to herself.

Her mermaid form follows the trend of all of the other Mermaid Princesses, with two pearl bracelets around her right wrist and her yellow tail. She has long, straight, blond hair with bangs and yellow eyes.

Lastly, there is her idol form, Yellow Pearl Voice. Her costume is a short golden yellow dress with a large light yellow stripe in the middle with yellow- orange ruffles on the sides. The dress has a short knee-length yellow pleated skirt with an orange-yellow bow on the back. It also includes pale yellow high heel boots and light yellow gloves with cuffs.
Coco does not appear in a mermaid princess gown. Yellow Pearl Voice only has one outfit in the manga, and has received no power-ups.

In the anime, Coco shouts "Yellow Pearl Voice!" to transform. In the manga, Coco does not have a phrase to transform, she simply just transforms with her own will. Coco can sing to fend off enemies. Once joined with the other mermaid princesses, her voice's power increases. In the manga, she can even do so in her mermaid form and without her pearl. 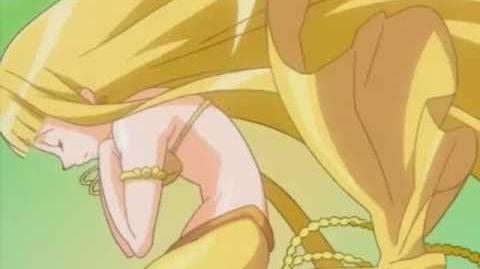 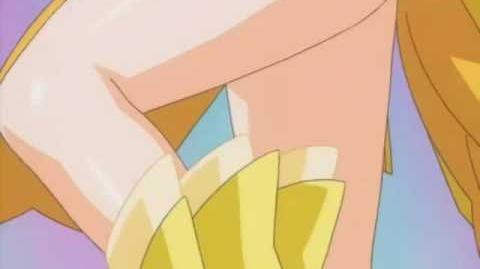