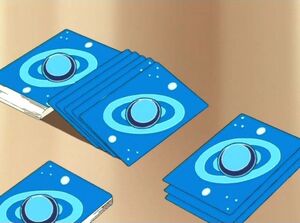 The Fortune-telling Cards are an item used in Mermaid Melody. These cards are called "Mermaid Fortune Telling" (Mermaid Uranai) in the manga. The cards are seen in the Eye Catches of season 1.

In Episode 14 , the cards were shown by Hanon. The cards played some roles in temporarily summoning Aqua Regina when Kaito entered Lucia's room. He was asked by a mysterious voice to pick up one card, and that card showed the image of Aqua Regina. subsequently, Aqua Regina thanked him for picking her up, and she appeared before Lucia and the others when they were in peril.

These mermaid cards are used to predict the future. Hanon also used them to check for love compatibility and to see the current state of each of the girls of the main trio.

The backs of the cards are blue. The design on the back shows two light blue rings around a blue circle with a dark blue outline. A few white spots are also drawn on the back. On the front, the card varies from design, however it has a picture of good or bad things associated with foreseeing. The card most often shown in the anime is the Pharos or Lighthouse card, which stands for difficult situations to come. Another card is the Panthalassa card, which is a bad omen.

Retrieved from "https://mermaidmelody.fandom.com/wiki/Fortune-telling_Cards?oldid=28489"
Community content is available under CC-BY-SA unless otherwise noted.