In her mermaid form follows the trend of all the mermaid princess with two bracelets on the tail and on her arm with star clips in her hair and star earings.

In her human form her hair is noticeably shorter (shoulder length to be precise) with a 'X' shaped clip in her hair. Sometimes she wears a white short dress with purple flowers on it and on other times she wears a cream sleeveless strap top with a blue short skirt.

Her first casual outft is a white dress with purple pinkish flowers on it,this outft is usually accompanied with some sandals with frills on it.

Her second casual outfit is a yellow top accompanied with a green short skirt,she usually wears a pair of blue ballerina shoes with this outift.

Her third casual outfit is a cream-coloured sleeveless top with a small bow on it,accompained with a blue short skirt,she usually wears a pair of blue flat shoes with this outfit.

Her first casual winter outfit is a light blue off shoulder top accompanied with a blue short skirt. The sleeves and the top of the shirt is an aquamarine colour. She usually wears a pair of blue flat shoes with this outfit.

Her second casual winter outfit is another light blue off shoulder type top,but the sleeves cover her shoulders and has frills near the chest area. She wears a bluish purple dress underneath it,and has an aquamarine-coloured belt around her waist. This outfit is usually accompanied with a pair of brown boots with blue socks underneath.

In her idol form she wears a short blue ruffled dress with a blue trim at the top. As in her mermaid form she keeps the star earings and clips and wears gloves that reach to her wrist and fabric attached that extend to her lower arms. 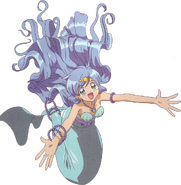 Add a photo to this gallery
Retrieved from "https://mermaidmelody.fandom.com/wiki/Hanon_H%C3%B4sh%C3%B4/Clothes?oldid=25948"
Community content is available under CC-BY-SA unless otherwise noted.