Karen (かれん Karen) is a supporting character in the anime and manga Mermaid Melody.

Karen is Noel's younger twin sister; however, they both live in different parts of the oceans and have never met. Even so, she cares a great deal about Noel without knowing what Noel is really like. When she is told that Noel was captured by Gaito from her servants, she vows to find her no matter what. Even though it was not true, Karen believed that Rina abandoned Noel while she was being captured, but Noel was in fact, sacrificing herself to let Rina escape. Due to the misunderstanding, Karen disliked Rina for a long time.

When Karen appears before the other mermaid princesses: Lucia, Hanon and Rina, she saves them from the Water Demons with her extraordinary singing voice. Delighted that they found another mermaid princess, Lucia asks Karen to join them, but she straight-forwardly refuses.

Karen talks with Rina for another time, and she believes the incident with Noel's kidnapping is a misunderstanding. Even when things were straightened out, Karen still goes out to search desperately for Noel alone.

After a long time searching for Gaito's castle, she finally finds it moving through the ocean thanks to the help of Lucia, Hanon and Rina, who were also searching for the castle. Karen gets stuck in a black mist just after the Black Beauty Sisters are defeated, however she is saved by the other princesses before she can be captured, which leads to the castle disappearing again.

Eventually Karen accepts the mermaids and joins them to fight against Sara, the Water Demons, Gaito. When they find the kidnapped Noel and Coco, Karen immediately swims as fast as she could to rescue Noel and hugs her, even going as far as calling her 'Onee-sama', a respectful way of calling an older sister. In a way, Karen's main goal to rescue Noel was finally over.

Karen finds a love interest in Subaru, and they are shown researching the mysterious temperature rise in the Antarctic Ocean.

Karen has a penguin friend name Pipi who helps her contact the other princesses to save Lucia and the Legendary glacier.

Karen's attitude sees a big change in the second season; she loosens up a little and becomes more caring to the other princesses. She comes to help them in episode 16, where we find that she has interest in beach volleyball.

Karen is a very mysterious character. Most of the time, she is calm and mature; however, she acts coldly towards the other mermaid princesses when they first meet. Other than that, she is very loyal to her friends and loves her sister, Noel, very much, long before she even met her. Her caring side can be shown towards her feelings for Subaru, whom she loves but decides not to pursue because she worries that her being a mermaid princess and often having to fight against evil would put his life in danger. By the start of the second season, though slightly still arrogant, she is much kinder and more open to having fun and much closer to the other mermaid princeses. On a side note she seems to love eating human food, especially okonomiyaki as shown in episode 35 and Pure episode 19.

Karen has long, dark purple hair with curled ends, and her eyes are purple, just like her hair. Karen is also taller than most of the other mermaid princesses. She has a birthmark on her right cheek.

Karen, just like the other mermaid princesses, has three forms. This includes her human, mermaid and idol forms.

In her human form, Karen has dark purple hair with ringlets and pale skin as well as medium brown eyes. Karen like other mermaid princesses wears a necklace around her neck carrying a purple shell, containing her precious, purple pearl. Her hair in human form is darker than her hair in her mermaid form.

Karen follows the trend of all the other mermaid princesses, two pearl bracelets around her right wrist and long dark purple tail.

Lastly, there is her idol form called 'Purple Pearl Voice'. Her costume is a white short strapless dress with black purple ruffles down the one side and it is above knee length with purple trim at top. Her bow is the same color as her hair, but in a darker shade. Her gloves are white with purple cuffs that extend to her mid arm and her high-heeled boots have the same colors. She has a purple seashell barrette in her hair. Her idol form is very similar to Noel's form, due to them being twins.

In the anime, Karen shouts 'Purple Pearl Voice!' to transform. In the manga, she can transform at will with no incantation. In her idol form, like Lucia and the others, Karen can use her singing voice to get rid of enemies. In manga, at the end of her songs, she uses 'Cutie Hot Pitch' whereas in the anime, she uses Lucia's 'Love Shower Pitch!' 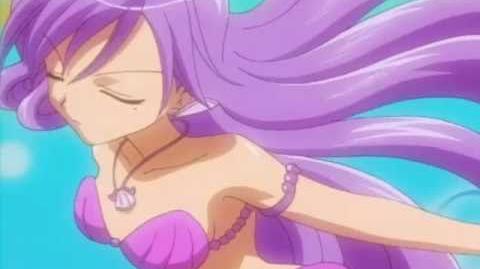 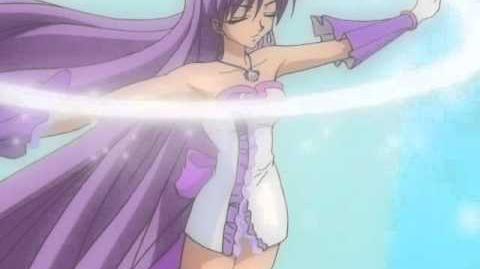 Retrieved from "https://mermaidmelody.fandom.com/wiki/Karen?oldid=29739"
Community content is available under CC-BY-SA unless otherwise noted.