Since Lucia is the North Pacific Ocean princess, she mostly wears pink clothing in her mermaid and idol form. In her human form, she is more likely to wear girly clothes like skirts.

Lucia wears this cute mermaid outfit when she is swimming in the sea. Her hair is a brighter lemon-blonde color and it's much longer than in her human form. Lucia's hair is tied up in pigtails by two pink hair ties. The ends of her hair are slightly curled and a small piece of hair is sticking out on top of her head. Two ends of her fringe are longer than the rest. Her seashell bra is light rose colored with baby pink beads on the sides. Her tail is a solid fuschia color, however the top of it is red. She wears her pearl necklace, pink shell earrings, red bracelets on the lower right arm and a pink bracelet on her upper left arm.

This cute mermaid outfit is worn by Lucia when she attends ceremonies and important events. Her hair appears more glossier and brighter than in her regular mermaid form. Lucia's hair has ringlets and is tied with two white flowery hair bands. Her seashell bra is a light shade of pink with small orange spots and red beads on both sides. She wears a flared skirt on top of her fuschia tail. The first layer is a rose pink with frills. The second layer is a lighter pink with slightly more frills. The third layer is a very light pink that almost looks like white. Three rose-red colored bows are attached on top of her skirt. The three layers are pleated and flow down her skirt. She wears: small pink gloves tied with red ribbon, rings, her shell necklace and red bracelets on her tail.

Lucia wears her Idol clothing when she is defeating villains. Her hair is the same as in her 'Mermaid' form, however her ends are less curled and appear straighter. Lucia's costume consists of a pink dress with pearly straps covered with red beads and decorated with flaps. The bodice is light pink with three fuschia colored buttons. Her mini skirt is made up of two layers. The first layer is dark pink and has small frills. The second layer is a lighter pink color and it's pleated. Her boots are white and covered with pink frills just like her gloves. Her accessories are: a E-Pitch microphone and her shell necklace.

In her Super Idol Outfit, Lucia has more frills on her outfit.

In Lucia's Human Form, her hair becomes shorter and turns into a honey blonde color. Her eyes become dark orange instead of blue. Lucia's taller than Hanon- but shorter than Rina. She usually wears a short denim skirt and a pair of red, tall lace up boots. Her top changes equally to the season. She appears more frequently wearing a white and red short-sleeved top with a large red star stamped on it.

Lucia wears a girl's school uniform just like Hanon. It is a pink sailor uniform with a large red bow, red collar and hand cuffs. Down her shirt, their are six pink buttons. Her skirt is a red pleated dress. Her winter uniform is not much different, but the sleeves are longer and the shirt is not tucked into the skirt. 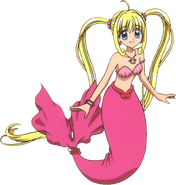 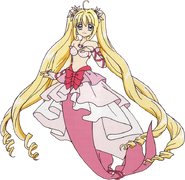 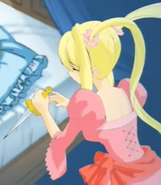 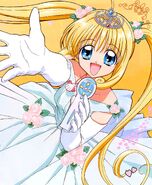 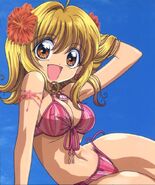 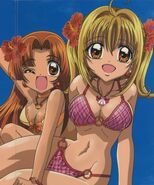 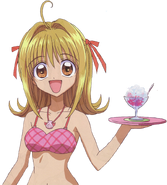 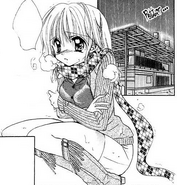 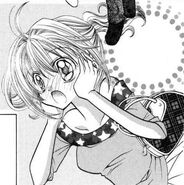 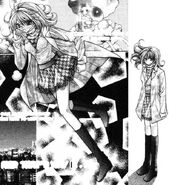 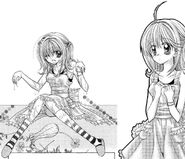 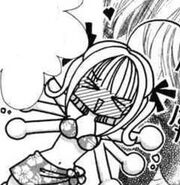 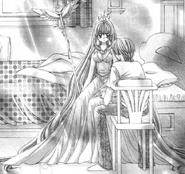 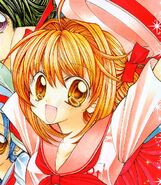 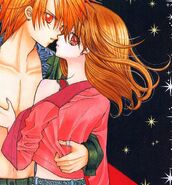 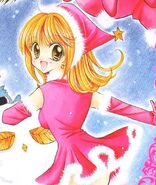 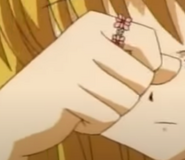 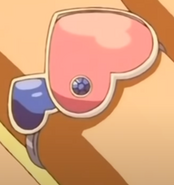 Lucia's ring given by Kaito 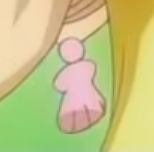 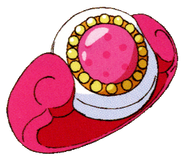 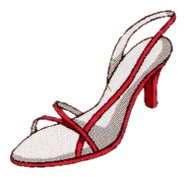 Shoes that go with her red dress 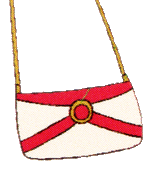 Bag that goes with her red dress 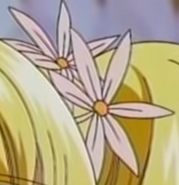 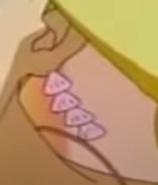 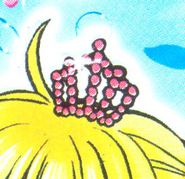 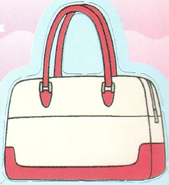