Microphones are tools that have several abilities. There are many kinds of microphones with different and special powers owned by different races of the characters in Mermaid Melody.

Microphones are an instrument for converting sound waves into electrical energy variations, which may then be amplified. It can make someone's voice to sound louder or even better if the person has a bad voice. They are invented by humans with great technological knowledge or by special robots in factories.

The microphones that belong to the Mermaid Princesses are called E-Pitches and are made by the power and the energy of the pearls of the mermaids. All the microphones have the ability to cause pain to demons, sometimes more, sometimes less. These microphones have other powers too, but the mermaids have to learn to control their voice to gain more powers. These microphones also give the Mermaid Princesses’ image songs. These are songs that can be sung only by a specific mermaid. The newer the image songs are the more power they have.

Aqua Regina can upgrade the microphones so that they are more effective to the enemies that the princesses are facing, and is able to grant them new and more powerful songs.

Lady Bat's microphone is kind of like a headset. It gives him the ability to hypnotise someone and make people unable to protect themselves. His song is powerful enough to hypnotize a whole audience of a fake magic show to catch the Mermaid Princesses. If his microphone is used in combination with the other Winged Ones, it can cause a Mermaid Princess great pain. His microphone appears when the background music of his song begins.

Alala's microphone is long and white with a large pink sphere on the top nestled with a red beaded band on a yellow curve and a small blue one on the bottom. The pink sphere has a yellow star inside it and it has five lines connected to the middle. It also has a beaded band below it. The microphone has been replaced once by a smaller microphone which was created by Fuku out of one of Seira's heart fragments to help Alala catch the Mermaid Princesses. The microphone was to be used to lure out the Mermaid Princesses. At the moment Alala succeeded in this, the mircophone disappeared. Alala's alternate microphone hasn't been seen since then. Her alternate microphone is shorter and fatter than the first version. It additionally has a smaller beaded band on the bottom shaft and also replaces the yellow rough bands with the smoother ones during the upgrading. The star inside the upgraded microphone has no internal lines. If the microphone is used in front of women, they become confused. On the other hand, if the microphone is used in front of men, they become infatuated with her. This microphone effects people of all genders differently.

Lucia singing with her E-pitch 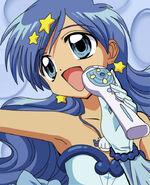 Closeup of Hanon with her E-pitch

Hippo carrying Lucia's, Hanon's, and Rina's upgraded E-pitches
Add a photo to this gallery
Retrieved from "https://mermaidmelody.fandom.com/wiki/Microphones?oldid=29356"
Community content is available under CC-BY-SA unless otherwise noted.