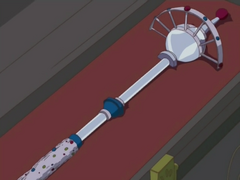 Mrs. Amagi's Staff is originally belonged to Mrs Amagi. Due to her passing away, it now belongs to Rihito and Michal Amagi. Mikeru could recognise the power coming from the staff as Panthalassan power.

The staff first appeared in Mermaid Melody Pure episode 34. During Michal's hysteria, Rihito found the key to the case in which the staff was in. Mrs Amagi always treasured the case and kept it safe, however she never showed what's inside it to either one of her children.

At the final episode of the series, the staff isn't shown, however, it is likely that Rihito put the staff back in its case (after Michal was reborn).

Rihito used the staff in Mermaid Melody Pure episode 38, to fight against Mikeru. The staff enabled Rihito to banish Mikeru's fairy-like minions and the light coming from the staff also forced him to retract his wings.

The staff is silver in color and the handle and the tip are decorated with red and blue gems. The staff is similar in design to the one that is owned by Gaito, however, the color scheme is different.

Retrieved from "https://mermaidmelody.fandom.com/wiki/Mrs._Amagi%27s_Staff?oldid=26486"
Community content is available under CC-BY-SA unless otherwise noted.