Noel (ノエル Noeru) often incorrectly romanized as Nuil or Noelle is one of the main supporting characters in the anime Mermaid Melody.

Noel and her younger twin sister Karen are twins, both born on either side of midnight between Thursday, February 13 and Friday, February 14 in 1986. However, they were born on opposite sides of the world, with Noel being born in the Arctic Ocean and Karen being born in the Antarctic Ocean. Noel lived a calm life until the day her kingdom was destroyed by Gaito and his minions. Noel escaped, leaving her kingdom behind. While escaping, Noel met the mermaid princess of the North Atlantic Ocean, Rina Toin, whose kingdom had also been destroyed. For a while, they traveled together, until Gaito and one of his minions, Yuri, caught up with them. Gaito tried to trap Noel and Rina, but Noel sacrificed herself and told Rina to escape. For a long time after that, Noel was trapped in the depths of the ocean in Gaito's castle, locked away in a large glass tank. Karen went out to search for her sister after hearing of this.

In the second season, Noel is seen to be a gentle, kind girl who is much more mature than Karen and Coco but is still immature at times. She also seems to be a strong volleyball player, and likes to play matchmaker as well. Noel is seen as having knowledge of magic objects and places, such as the Miracle Bay.

Noel has a gentle and kind nature and is a bit shy. She loves to read books and is a good friend of Rina. At times she can be a bit bold, as when she clung to Nagisa in order to make Hanon jealous.

Noel looks a lot like Karen. She has the same height as with the same hairstyle; however her hair is dark blue instead of purple and has opposite side bangs with dark blue eyes. Her birthmark also is on the other cheek. She occasionally wears glasses. Early in the both the manga and the anime Noel had a different hairstyle the right side of hair went over her face

Noel has three forms. Those are her human, mermaid and idol form.

In Noel's Human Form, her eyes are slightly darker than other forms. Her hair is navy blue and wavy, with a right parted fringe. In the second season, Noel is shown wearing glasses at times.

Her Idol form, her Indigo (Aiiro) Pearl Voice is a short strapless blue dress with purple ruffles on the one side, it is above the knee with a light blue trim on the top. She also has white gloves and high heel boots with pale blue pearls on the wrist and ankles and Indigo cuffs that extend to her mid-arm and slightly below the knees. Adorning the back of her waist is a light blue bow on the back with dark blue ribbon to match the dress. A blue and purple barrette partly holds back her hair. Her idol form is very similar in appearance to Karen's idol form, which is because they are twin sisters.

In her idol form, like Lucia and the others, Noel can use her singing voice to get rid of enemies. Noel's voice matches her personality, calm, and soft. She is not shown to have her own song in the manga or anime, but instead she is usually seen singing along side Coco and Karen. In the manga, Noel has two different hairstyles. In arc one, her hair is middle parted, long and wavy. But when she makes her entrance in the second arc, she has a side fringe resembling Karen's, but on the opposite side. 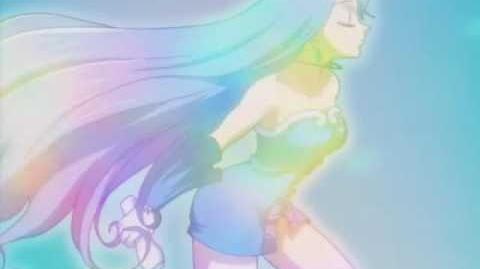 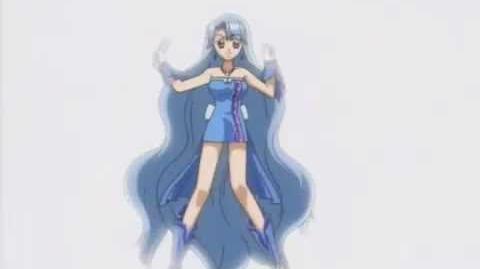 Retrieved from "https://mermaidmelody.fandom.com/wiki/Noel?oldid=29923"
Community content is available under CC-BY-SA unless otherwise noted.