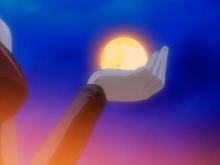 The orbs of Seira's heart or "the balls of light", are orbs extracted from Seira's heart fragments. Mikeru gives them to his servants as rewards and to increase their powers temporarily.

The orb will enable the user to be twice as powerful than they were originally, their powers will be more effective and strengthened, but only temporarily. The orb can also heal or save someone's life (Like in Episode 79 when Sheshe used the orb to heal Mimi).

The powers of the orb can include creating illusions and destroying buildings.

The powers of the orb can be activated by squeezing it.

The orb is shaped like a ball and it is orange in colour. It has an orange glow and is very shiny.

If the powers of the orb is used on a person (Mimi in Episode 79), the person will glow as well.

The orb is used at least once by all of Mikeru's servants, mostly used in battles to capture the mermaid princesses.

Add a photo to this gallery
Retrieved from "https://mermaidmelody.fandom.com/wiki/Orbs_of_Seira%27s_Heart?oldid=28740"
Community content is available under CC-BY-SA unless otherwise noted.