Rina Tōin (洞院 リナ Tōin Rina) sometimes romanized as Rina Touin is one of the protagonists of Mermaid Melody. One of the episodes that centers around her is Episode 62.

Rina is the Mermaid Princess of the North Atlantic Ocean. She couldn't let go of her past when her kingdom was attacked and destroyed by Gaito. While swimming away with her best friend, Noel, she was about to be captured by Gaito and Yuri until Noel pushed Rina out of the way and told her to get away and find help, allowing her to escape. Because of this, Rina felt guilty for Noel having been captured and the mermaids of the Antarctic Ocean, including their princess Caren, incorrectly believe that Rina had abandoned Noel to get to safety. This narrative is proven false when Caren is rescued from the clutches of the Black Beauty Sisters, and so the animosity between them comes to an end.

Rina is almost tricked by the Black Beauty sisters to join Gaito and be captured because of them pretending to be Caren and Noel, however she soon breaks out of it. After rescuing the real Princesses, her and Noel reunite.

When Kaito returns to Japan, Rina is appalled when she learns he's forgotten her as well and starts suspecting something might've happened to Kaito. She grows a dislike for Mikaru just like the other mermaids, because of her jealousy and constant need to be around Kaito and couldn't stand Lucia's depressed state.

Rina later receives a letter form her kingdom and is told to return to her palace soon. A boy her age finds her on the beach reading the letter and crying and seems to take a liking to her. They start meeting more frequently by chance and slowly get to know each other better. The other girls soon realize she's slowly returning the feelings Masahiro has for her and try to get information out of her about it.

One day, when the rest of the princesses Caren, Coco and Noel visit, they notice Rina and Masahiro's behaviour and try to learn more about the both of them. They misunderstand Masahiro's actions and think he likes to play around with girls' hearts, however they soon learn that isn't the case and he's only interested in Rina. By the end of the season, Rina and Masahiro have admitted their feelings for each other.

Rina has a very serious and fearless personality. At the beginning of the series, she is seen as a loner and acts a little bit like a tomboy at first, but later warms up to Lucia, Hanon and Kaito. Because of her "cool attitude" and beauty, Rina is admired by all her classmates, which brings out her honest and loyal nature. Many people believe she has the best voice out of all the mermaids.

Rina's mature, steady, and delicate nature show her intelligence and kind heart. One way this shows through is how she is very interested in comedy, often watching skits and other shows of that type on television and going out to local comedy performances. Even so, all of this hides that she is haunted by the incident of her palace being destroyed and Noel being captured. As a result of this incident, Rina has trouble telling people about her problems.

In her human form, she has grey eyes. But in her mermaid and idol, form she has green eyes. In her human, mermaid, and idol form, she has seaweed green hair, but in her idol and mermaid form it is much longer, she wears her pearl tear around her neck containing her green pearl.

In the Manga, like all other mermaid princesses, her hair gets lighter in her mermaid form, going from seaweed green to a bright lime green. It is likely it was changed to give her a more mature look.

As a mermaid, Rina has to transform into a human in order to stay on land. When she is facing a sea monster, she transforms into her idol form, Green Pearl Voice, and uses her voice as an offense. Her two songs are Star Jewel and Piece of Love. In the Italian dub she sings Stella Preziosa. In the manga, she uses "Cool Shine Pitch" instead of the "Love Shower Pitch" she uses in the anime, along with the rest of the mermaids.

Rina's human form only differs slightly from her mermaid form. Her hair remains long, reaching to just below her hips and doesn't change color, while her eyes become grey instead of green. Her choice of clothing lean towards the sophisticated and masculine; she's usually in dark slacks or blue jeans, long sleeved or sleeveless dress shirts, and dress shoes. During school, she wears the boys uniform instead of the girls. She is one of the tallest of the mermaid princesses behind Caren and Noel.

Rina was born on a Saturday, thus making her a green mermaid, with green hair and green eyes. Her outfit is the same as the rest of the mermaid princesses. She wears the similar shell bra, shell locket, a bracelet around one of her upper arms, and double pearl bracelets around one of her wrists and her tail. Rina’s princess outfit was first seen in chapter 14 of the manga. Her outfit is very similar to her regular mermaid outfit. However, some changes are a headband of small, yellow roses, two strings of pearls looped around the base of her tail, and a dress with a cleft and three bows on the side of her tail. Rina appeared in her princess form a second time in chapter 19; this time her dress is identical to everyone else- with both bows and the cleft in her skirts aligned in the center of her front side. In the anime season Pure, during the Summer Green Festival Rina's princess outfit is the same in chapter 14 but instead of a rose headband on her head there was a crown in its place.

Her first outfit consists of a long light green halter neck dress with a slit on the side ending at the knee, long light green gloves with dark green slightly ruffled cuffs to her upper arm, and high heeled light green sandals. Rina, along with Hanon and Lucia, gained her second outfit in episode 28 when the trio was upgraded by the goddess Aqua Regina. Her second outfit is noticeably different from her first one. Her long dress now is complete with double layers. The first layer is light green and the second is slightly lighter, and she has a seaweed green bow on her right side. Her gloves now have a second layer which are a shade lighter, and the sandals are now have pearls on the straps. She also gains accessories such as a yellow-green pearl bead headband, a watch, and slightly darker green cuffs on the top of her dress. Her hair also lengthens massively. Rina’s second form is more powerful than the first one; it enables her to defeat the Black Beauty Sisters with her new songs.

Like the rest of the mermaid princesses, Rina needs her pearl in order to transform into her idol form. Her pearl is also needed in order to summon Aqua Regina. When in her idol form, her voice was transmitted by a microphone like object called the e-pitch, in order to defeat the enemies. She has two image songs from both seasons of the anime: 'Star Jewel' and 'Piece of Love'. In the Italian dub, her song is 'Stella Preziosa'. Rina use the phrase Cool Shine Pitch to attack enemies in the manga but in the anime she uses Lucia's Love Shower Pitch! 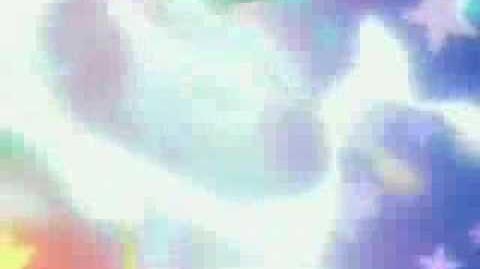 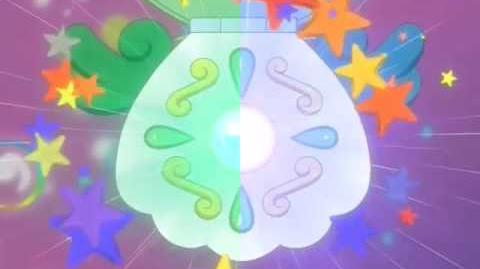 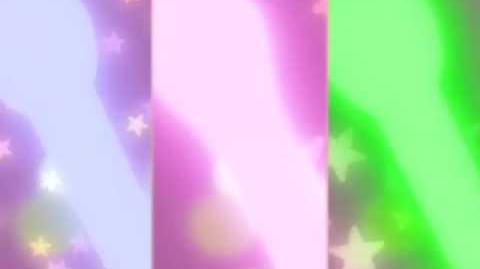 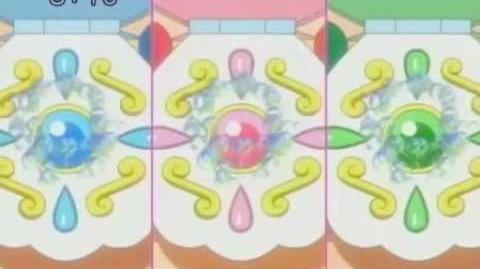 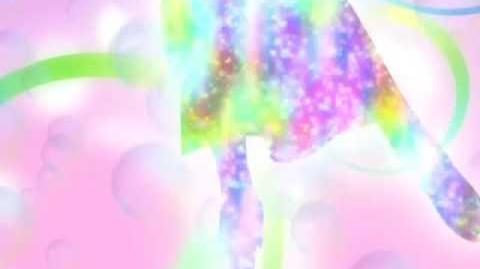 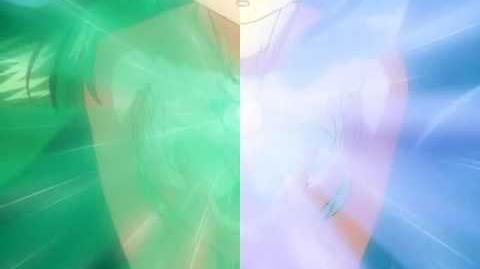 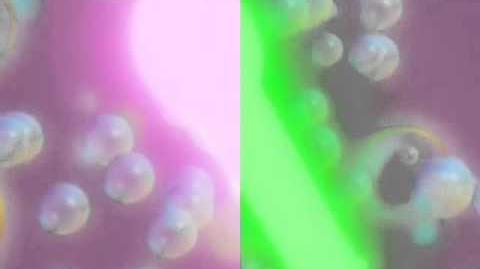 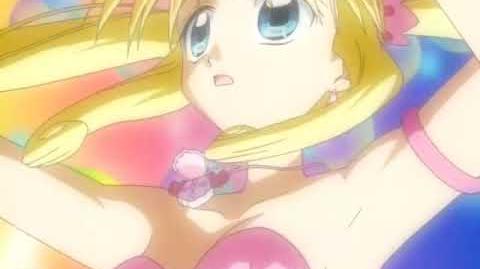 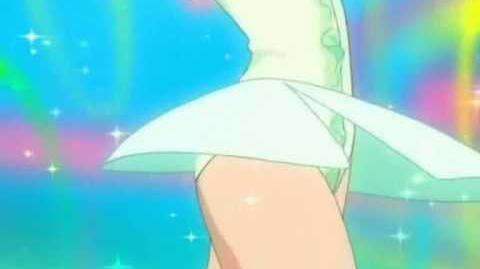