Rina is the mermaid princess of the North Atlantic Ocean Kingdom so, most of her clothes are green.

Rina wear a different bra for her princess outfit and what is interesting is that her dress is different than the other princesses’ outfit. Her green dress have a cleft and the three green bows are on the side of her tail instead of in front and in the center. She also wear a headband filled with yellow roses.

During the Summer Green Festival, Rina wears the same thing but a princess crown is placed on her head that replace the yellow rose headband.

Rina wears a grey coat with a white shirt underneath. In her Human Form, her eye color changes from light green to grey along with a grey shirt that says "RELEVÉ" (French for "Statement", possibly also referring to a ballet manoeuvre). Her hair also grows shorter and a lot more straight, the hair color also changes to a darker shade of green.

Unlike Lucia and Hanon, Rina wears a male School Uniform. The male School Uniform consists of a white sleeved shirt with a collar and cuffs. Rina does not button her collar though only to have her shell necklace visible. She also wears long blue pants with black school shoes. Just like Lucia and Hanon, Rina wears her own green beaded ring made by Lucia and a green bracelet much further in the series which allows her to transform into her second idol form.

In Rina's first Idol Form, she wears a long, light green dress, with a darker green turtle neck. She also wears long gloves that extend to her upper arm with dark green frills. Rina wears green shoes along with her dress and two green shell earrings. Just like the other Mermaid Princess, she wears her green shell necklace containing her green pearl and is always holding her e-pitch.

In her Super Idol Form, she wears a long light green dress which now has two layers with two different shades of green. Rina also wears a beaded olive green headband and a pair of green evening gloves that extend to her upper arm along with extra frills. She still has a turtle neck with a sash tied into a ribbon on the side that flows down her dress . Her dress also has green ruffles down each side and she wears the same shoes attaches with green frills. Rina still wears her shell necklace and holds her e-pitch. Like Lucia and Hanon, she wears a green bracelet that allows her to transform into her second Idol Form. 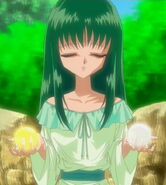 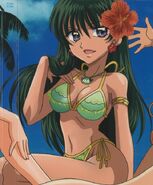 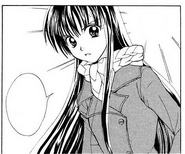 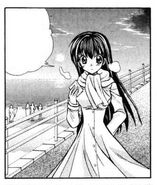 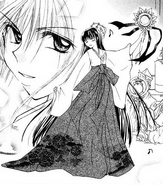 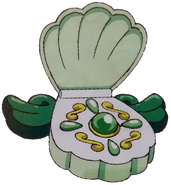 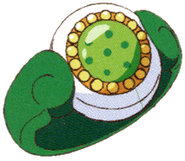 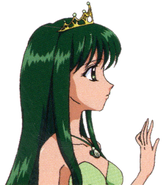 shoes that go with her swimsuit 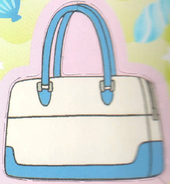 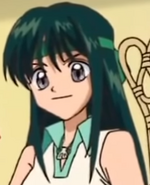