This article would benefit from a rewrite as the contents are either not neutral or contain poor grammar and spelling.

Seira (星羅 Seira) is a supporting character in the second season of Mermaid Melody, succeeding the former Orange Mermaid Princess of the Indian Ocean Sara. Her name can be a reference to Sara's name. The episode that centers around her is episode 70.

Seira is Sara's successor and she was absorbed right after she was born, leading Lucia having to collect her fragments that are trapped within Mikeru's wings and teach her the wonderfulness of loving someone at the same time. In the series, Seira tries her best to help everyone despite being absorbed into Mikeru. She is always there to encourage the others, especially Lucia. Seira is a very strong mermaid princess. When Seira was absorbed into Mikeru, she still was able to protect the others at times when needed, but at episode 36, Seira could not escape from Mikeru's territory. When Mikeru absorbed her fully into his body, she appears to Mikeru as a spirit, and sings Birth of Love, trying to cheer Mikeru up. She comes to know that Mikeru's true self is a fossil, and feels sorry for him. She understands Mikeru and Mikaru's loneliness, and tries to save them, hoping her songs will reach them. She was the first to truly care about Mikeru. After Seira's fragments were collected and she was reborn, she did her very best to help Mikeru rest in peace.

Seira is a bubbly and happy girl. She is very nice to everyone, tries to be positive and wants to be like the rest of the mermaids when she grows up. She is also very creative.

Seira has amber hair and she is the shortest and youngest mermaid princess. She has an open brown eye colour.

In her Human Form, she appears the same as her Mermaid Form, only her bangs become less even, she is slightly taller and her skin becomes more pale in color. 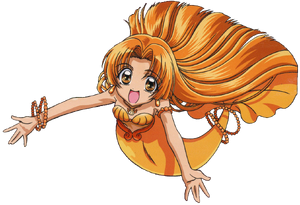 Seira's mermaid form is the same as every other mermaid princess except orange. She has a bracelet on her left upper arm, double pearl bracelet on her right wrist and also around her tail. Above her necklace she wears a thick orange choker.

Her costume is a dark orange strapless dress with a along with an orange mini skirt with yellow ruffles and it also includes a yellow bow. The first layer of her gloves are the same color as her dress and the second layer is the same color of her bow. The first layer of her boots are a yellow-orange color and the second layer is like a golden yellow color with dark orange pearls around them.

Seira can transform into Orange Pearl Voice like Sara though Seira's and Sara's outfit are different. 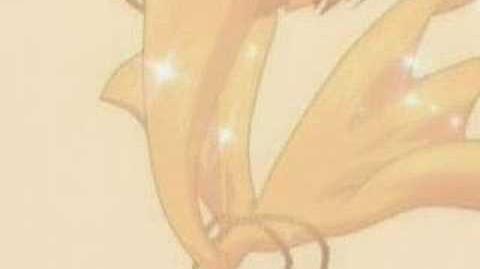 Seira transforms by saying "Orange Pearl Voice". Her transformation is around 10 seconds long.

There is no defintive canon information about when Seira is born, and thus her birthday can only be guessed at. There are a few likely possibilities, however, and the consensus of the fandom is generally split between them.

Community content is available under CC-BY-SA unless otherwise noted.