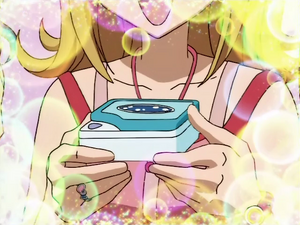 Seira's Compact is a box that holds Seira's pearl inside it until she is born (then she will keep it).

Lucia kept Seira's pearl inside her own locket (in the beginning of Season 2) until Sara gave her the compact. In the manga, Lucia keeps Seira's pearl next to her own so she can share her own pearl's energy with the orange pearl.

In Episode 57, the Black Beauty Sisters state that an orange light was coming from Lucia's locket.

Sara then gives Lucia the compact for collecting Seira's heart fragments in Episode 59.

In the later episodes of Season 2 it is unsure who is currently keeping the compact in their possession because Seira sacrificed herself but it appeared back in Lucia's hands.

The compact lid is blue with the outer part a deeper shade of blue. The rest of the box is light blue. Inside the compact, there is a mirror om the lid part of the compact and in the center of the box is Seira's orange pearl. The compact is only seen when Lucia is collecting Seira's heart fragments or if Seira herself needs to talk to Lucia. Every time Lucia succeeds in collecting a part of Seira's heart, Seira appears as a a spirit to thank Lucia for teaching her another lesson about love before fading back into the pearl with a shower of sparkles.

1 of 2
Add photo
Retrieved from "https://mermaidmelody.fandom.com/wiki/Seira%27s_Compact?oldid=23120"
Community content is available under CC-BY-SA unless otherwise noted.