Seira wears this pretty outfit when she is in the sea. Seira's hair is more lighter with a few light yellow streaks. Her bangs are parted to both sides and look like a "M" shape. Her seashell bra is tangerine orange colored and includes light orange beads on the sides. Her tail is a solid orange color and slightly lighter than to the rest of her outfit. She wears her pearl necklace, orange choker, pale orange seashell earrings, orange bead bracelets on the lower right arm and a orange bracelet on her upper left arm.

Seira wears this pretty outfit when fighting with enemies or when she is singing. Seira's hair is similar to her 'Mermaid' outfit. Seira's costume is made up of a strapless red-orange tube top that is cut (on the top) in a heart shape with two thin black lines drawn onto the fabric. The red-orange flounced mini skirt is attached to the top part with a lemon yellow petticoat. Her tangerine-orange gloves have yellow and orange frills on them and so do her coral high-heeled boots. Her accessories are a : E-Pitch Microphone, shell necklace, bead bracelets and orange bracelet.

In her Super Idol Outfit, Seira gains more frills on her gloves, dress and boots. A large lemon-yellow bow is attached to the back of the dress. Seira's hair remains the same in both forms. 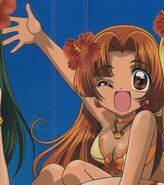 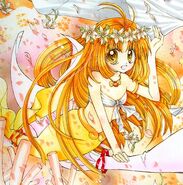 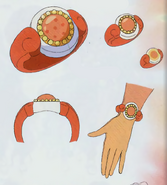