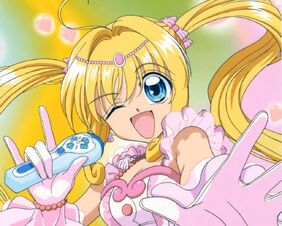 Songs are compositions for voice or voices, performed by singing. A vocal song may be accompanied by musical instruments. The lyrics (words) of songs are typically of a poetic, rhyming nature.

Although Mermaid Melody Pichi Pichi Pitch is comparable to any shōjo title, the anime's songs are used not only as opening/ending songs, but are also used as battle songs and image songs. There are 32 songs and approximately 50 background themes in the whole series. Each episode has at least one battle/image song performance.

To start a performance in english they say: "Pichi Pichi Voice Live Start!"

To end a performance in english they say: Love Shower Pitch!, How about an encore?.

Retrieved from "https://mermaidmelody.fandom.com/wiki/Songs?oldid=23243"
Community content is available under CC-BY-SA unless otherwise noted.